This is a fairly simple compact camera along the lines of Zeiss Ikon's other Ikonta derivatives, the Contina family.  It is small enough to fit comfortably in one hand - 115mm wide by 85mm tall by 35 mm thick (75 mm thick including the lens).  It takes 35 mm film in standard cassettes.  The Contessa range was made from 1960 until 1971 and the Contessa LKE was made from 1963 to 1965.  The name "Contessa" is a look-back to the companies that made up Zeiss Ikon in 1926 - one of which was Contessa Nettel.  This camera owes nothing to that make of camera and nothing to Contessa Nettel's designer, Dr Nagel.

The lens is about as good as they come - a Carl Zeiss Tessar.  Because of the age of this camera (1960s) it is not a Carl Zeiss Jena Tessar but a West German Carl Zeiss Opton Tessar.  Still a very good lens, though.  The serial number of the lens indicates it was made between 1965 and 1969.  As this camera was only in production until 1965, my specimen must be one of the last to be built in 1965.  The focal length is 50mm with a maximum aperture of f2.8 - so this is a vary fast lens - stopped down to f8, it is going to be superb.  The shutter is a Gautier Prontor 500 LK which is a meter-coupled Prontor with a maximum speed of 1/500 (about as fast as any leaf shutter ever will be).  The one thing that I miss on most modern lenses is the depth of field scale that was ubiquitous on lenses of this era and is present here. 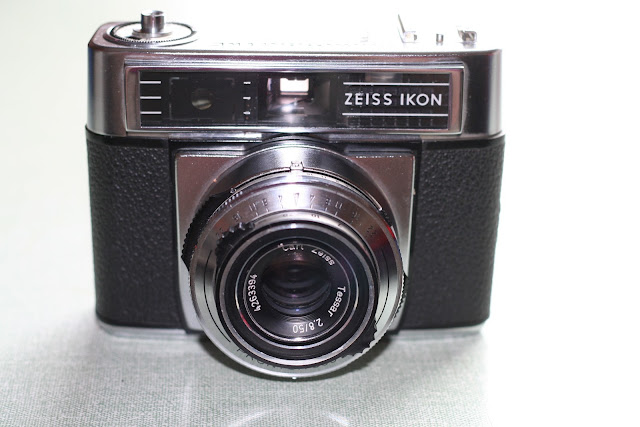 The accessory shoe is a hot shoe for flash connection and there is no PC connector for cold shoe flashes (an adapter was available as an added extra to allow cold shoe flashes to be connected).  These is a frame counter around the shutter release and a window that can be moved to indicate the type of film being used.  The options are Black and white, Neg, Flash, Sun, Artificial light.

The viewfinder is central and large enough even for spectacle wearers.  There are bright-lines in the file of view with parallax marks for framing close-ups.  The film advance is a lever of the top right as was now usual for 35mm cameras.  The film rewind, however, is underneath - a lever that pops out when the rewind button is pressed.  There are no strap lugs on this camera which means it is sensible to use the every-ready case but I like to carry cameras in my pocket, so I will end up one day dropping this one.  The only other thing of note is the presence of a tripod bush in the centre of the bottom plate.

After running one roll of film through this camera, I was very pleased with this camera.  It is easy to use, fits in my jacket pocket and is a suitable camera to use as a walk-around camera (i.e. one I take with me when I am not particularly wanting to take photographs but prefer to have a camera to hand just in case).  It is not obtrusive and I have found it to be excellent for street photography.

In the five months that I have owned this camera, this camera has grown on me.  My hands have now learnt where the controls are so I no longer have to look and think.  This probably happens quite quickly if you only use one camera but I have several that I use frequently.

I have a tendency to carry cameras in my pocket and that generates two problems with this camera.  Firstly, the shutter release gets accidentally pressed.  This is easily cured by not winding the film on until immediately before pressing the shutter release.  The second problem is that the delayed action lever gets moved which means that it takes a while to take the next picture.  This is made worse by the fact that the delayed action mechanism does not work very well any more.  It grinds its way through the nominal eight seconds with numerous pauses that necessitate manual assistance.

The rangefinder is reasonably clear in use but as I take mainly landscapes, I keep the camera focussed on the hyper-focal distance (which at f8 is twenty feet).

I really like the recessed rewind lever on the base.  This is a good two centimetres long - much longer than the rewind lever on most 35 mm cameras.  It is easy to use and fairly fast.

The only really awkward part of using this camera is setting the film speed.  As I only set this rarely (I generally use APX100 film so I only reset the film speed when I use a different film) it is not a problem.