This is a West German camera made between 1953 ad 1957. It is a simple viewfinder camera which is clearly built to a price but quite well made within that constraint. This camera has been well used - witness the scuff marks around the tripod boss - and, at least latterly, stored badly - the nickel plating is corroded indicating that storage has been been somewhere damp. The pictures are of the camera as I received it. I shall be doing an intensive clean this week and I shall post a picture of the clean camera for comparison.

The camera measures 120 mm by 60 mm deep and 75 mm high. It weighs 427 g without a film in
place. Being a viewfinder camera, it has very few controls.

Starting, as always, with the top plate. On the right-hand end is the film advance lever. This moves through around 180 degrees but needs two throws to advance one frame. The lever is on a ratchet and several small movements will have the same effect. This is one area where the camera is clearly built to a price as the lever consists of a bent piece of metal - not the most comfortable of levers in use. To the left of the film advance lever and close to the front edge of the top plate is the shutter release button. This is fairly small, nickel plated, and is threaded for a standard cable release. It is well placed for the right-hand index finger in normal use.

The centre portion of the top plate is raised. At the front of this raised portion is the name 'Edixa' in Art Deco lettering. Behind the lettering is a screw head (7 mm diameter) which is used to reset the frame counter. This needs to be set to the film length as it counts down to zero - i.e. it tells you how many shots are left rather than how many are taken.

On the left-hand edge of the raised portion is an accessory shoe. This has no flash contacts and so is a cold shoe in flash terms. In use, this is just as likely to have had a rangefinder in it as a flash gun.

On the left of the top plate (left of the raised portion) is the rewind knob. There is no fold-out crank here, but the central portion lifts up to provide a fairly ergonomic grip.

The front of the camera has the shutter housing centrally placed. The shutter is a Gauthier Vero shutter which is basically a cut-down Prontor shutter (a further evidence of design to a price). This shutter offers four speeds (1/25, 1/50, 1/100, 1/200) plus B There is no self-timer on a Vero shutter and there is no flash synchronisation setting - flash is provided for with a PC socket on the side of the shutter housing - this is X synch for electronic flash guns.

The iris diaphragm offers apertures from f/3.5 to f/16. The range of shutter speeds together with the range of apertures allows for good exposures with most films available 50 years ago and most light conditions. This might seem a bit meagre by modern digital standards but I have never found it to be limiting in my photography. 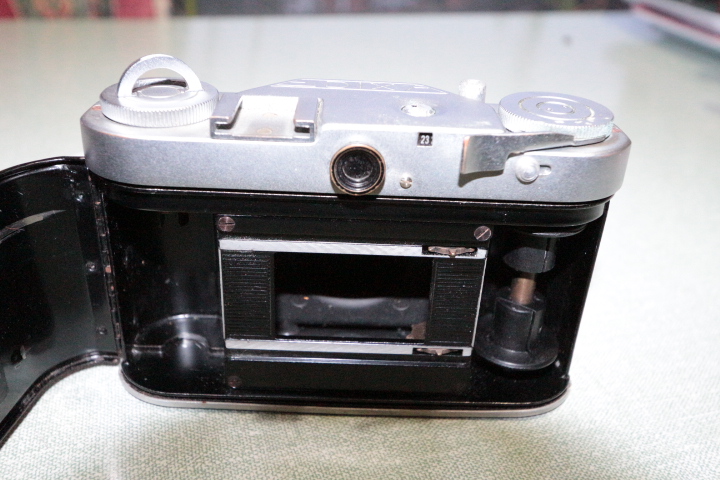 The lens is a Steinheil Cassar lens. The Cassar is a triplet and Steinheil seem to have generally supplied to the lower end of the market but I have always found them to be more than acceptable when stopped down to f/8 or f/11. See the test results further down to see how this particular lens performs. The lens has a focal length of 40 mm which is very slightly wide compared to 'normal' for 35mm photography (which is 43mm). The lens fascia bears the legend 'VL' which I take to mean that the lens is coated - it certainly has a slight colour cast to it. Focusing is by moving the front element of the lens (front cell focusing) rather than the whole lens assembly (unit focusing). This is generally considered inferior to focusing by moving the whole lens but any difference is technical rather than practical. The lens serial number is 889580 which should help me to date the camera precisely if/when I can find appropriate information on the Interweb.

The viewfinder sits above the shutter/lens and is much as I would expect for the time - i.e. rather small by modern standards but much bigger than was usual in the 1930s. It measures 8 mm by 12 mm. To the right of the viewfinder, below the shutter release button, is the maker's name - 'Wirgin' - again in Art Deco style. 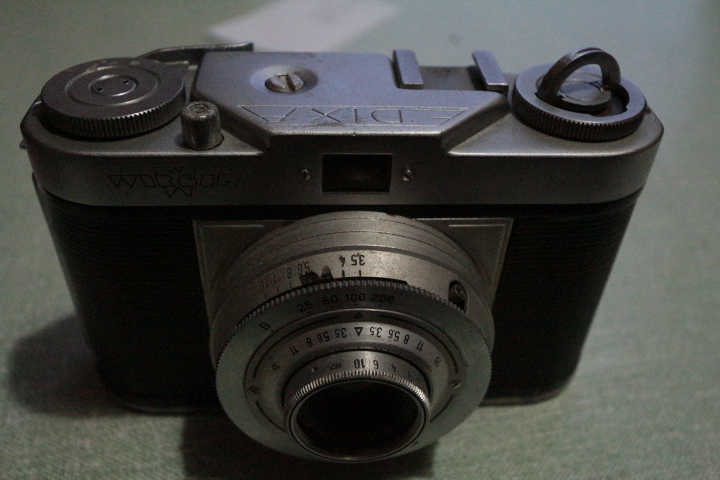 There are three items on the back of the camera - all on the top plate. Centrally is the viewfinder eyepiece. this is round with a diameter of 5 mm. This has a circular brass surround which is dangerous to wearers of modern spectacles - mine have extensive scratches on the right-hand lens caused by using old cameras. To the right of the viewfinder eyepiece is the frame counter window. This is a meagre 2.5 mm square and is right at the limit of my eyesight. Right of this, under the film advance lever, is a small slide. Moving this to the left allows the film to be rewound.

I have now finished the test film and had it developed and scanned by Snappy Snaps in Lincoln. Main negative is the presence of vignetting. Exposure is spot on as is focus (mostly focused at infinity).

This is a small, compact 35mm camera from Olympus. It is a part of the Olympus 35 line - 12 models with varying complexity. This model came out in 1972 and was produced for two years (as far as I can gather).

First, a description. The camera measures 110 mm wide, 75 mm high and 30 mm deep, not counting the lens, or 50 mm deep, counting the lens. It weighs 450g including a 24 exposure film. The top plate is sparse. On the right is the frame counter. this is reset to 'S' when the back is opened and counts up from zero. 30 mm in from the end of the camera is the shutter release. This is a chrome button and is threaded for a standard cable release - a conical thread to make fitting easier. Just behind the shutter release is the camera serial number. My camera has the number 215752.

Incidentally, to date Olympus cameras (Olympus Trips and Olympus 35 ECR, at least) you take out the film pressure plate and look on the reverse. There are three characters printed on the metal. The first character is a code for the factory where the camera was assembled, the second character is a year number and the third character is a month code.   Months run from 1 to 9 for January to September and then X,Y and Z for the last three months. The code on the pressure plate of my ECR is X2Z. (I cannot type the Japanese character in the first position so 'X' instead)) The 2Z signifies the camera was made in year 2 (i.e. 1972) and month Z (i.e. December). 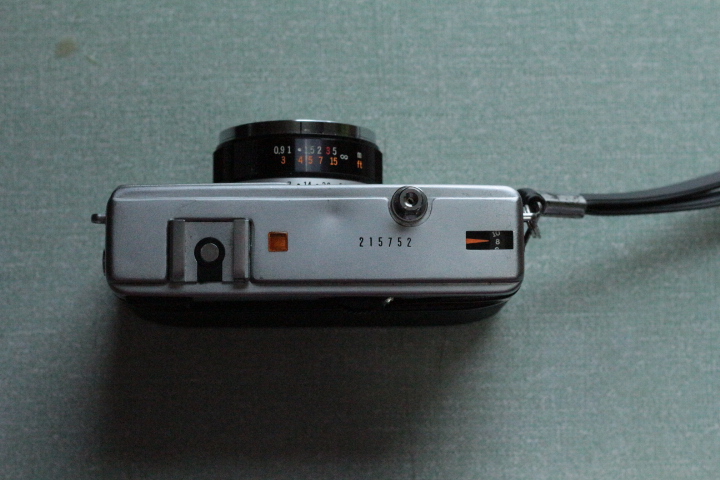 Just to the left of the mid-point is a square orange light. This lights up when the shutter release is pressed part way. This indicates that the battery is good and the camera is ready to use. It does not indicate that the exposure is good as it still lights if the light sensor is covered. Next to this is the accessory shoe. This is a hot shoe and allows for automatic flash use - more later. On the end of the top plate is a PC socket. using this does not to invoke the automatic flash system.

The front of the camera has an anodised aluminium strip (the front of the top plate). On the left this bears the legend "OLYMPUS 35 ECR". to the right are the small rangefinder window (5 x 3 mm) and the larger viewfinder window (12 x 8 mm). The lens/shutter housing is almost central. This houses the Seiko ESF electronic leaf shutter. The lens itself is an E Zuiko lens. The 'E' designation indicates five glass elements (A=1, B=2, C=3, D=4, E=5 etc.). this is a multi-coated lens with a definite blu tinge. Above the lens is the small light meter sensor - a CdS sensor - and below the lens is a window showing the selected film speed. This is marked in ASA but that is essentially the same as ISO. Just around the lens is a serrated ring which turns to select the film speed.


The lens takes 43.5 mm filters which cover the light meter sensor as well as the lens so no exposure correction is required for any filter being used. Around the shutter housing is the focusing ring which has a fairly short throw of about 15 degrees and focusses from 0.91 m (3 feet) to infinity. The scale is marked in both metres and feet but that is really academic as the focus ring is connected to the rangefinder and there is no need to look at the scale. The spot in the rangefinder is green and quite visible making the camera quick and easy to focus. 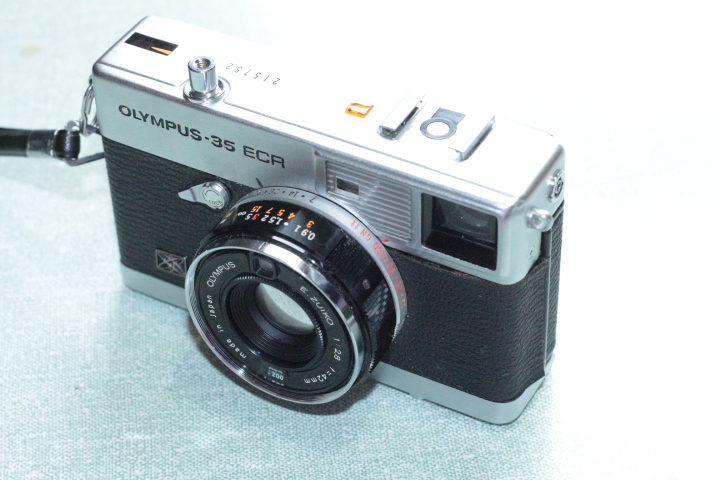 Between the focussing ring and the body is another ring to set the guide number of the flash being used. This has two scales - one in metres (black) and one in feet (red) - which scale you use depends on the guide number given by the flash gun maker. To the left of the lens/shutter housing is a small horizontal lever marked 'LOCK'. Pushing this down locks both the shutter to prevent accidental shots and also switches off the light meter to preserve the batteries. 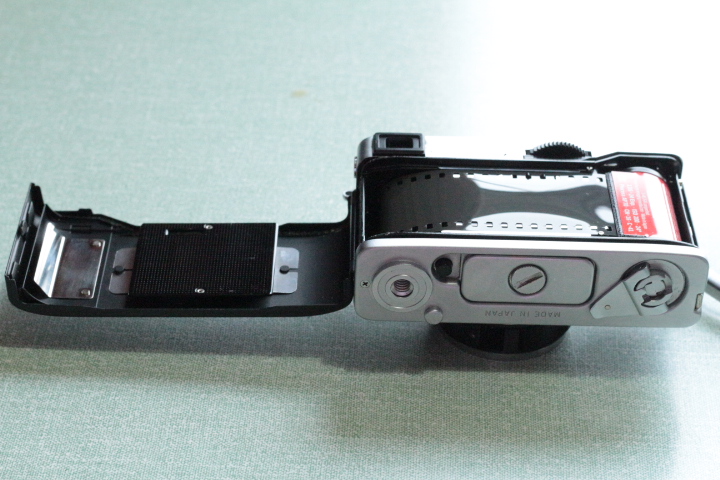 The base of the camera has four items on it. On one end is the 1/4 inch UNC tripod boss. next to this, and recessed, is the rewind button (black). In the middle is the battery compartment. This is designed to take two mercury batteries giving a working voltage of 2.7 volts. As mercury batteries are no longer available, I am using two A640 batteries which give a working voltage of three volts. This probably affects the exposure system but the % difference is going to be less than half a stop on the exposure and so is nothing to worry about. Next to the battery compartment is the rewind crank. this folds out and is nice and large - much larger than is usual on an SLR.

Just about all 35mm cameras of this age use foam seals to prevent light coming in around the join of the back. As with most 35mm cameras of this age, the light seals have deteriorated and, in fact, have almost disappeared. These will need replacing before the camera can be used - quite a simple job with the foam being available on the Interweb.  When this is done, I will run a terst film through the camera and post the results here.